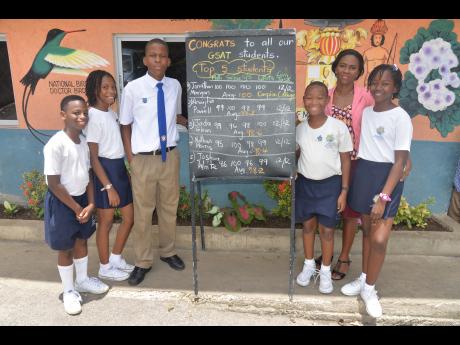 St James has produced a number of ‘bright sparks’ among the students who sat this year’s Grade Six Achievement Test (GSAT), with one particular student, Jonathan Morgan of Hosanna Preparatory School in Montego Bay, getting a 100 per cent average for all subject areas in the examinations.

“I am a little overwhelmed as I expected to do well, but I did not expect to get all hundreds in all the subjects,” said 12-year-old Jonathan, who is also Hosanna Prep’s head boy and who aspires to become an astrophysicist.

“I basically prepared for GSAT mostly by reading over my notes when I would come home from school,” added Jonathan, who has made Campion College his first school of choice.

“I did not attend any other extra classes except for the ones from school, and after coming from school, I would just do my homework and read over my notes a couple of times.”

High scores in the GSAT’s five core subject areas – mathematics, science, social studies, language arts, and communication task – was evidently the order of the day for a number of other schools in St James as the performance of Mount Alvernia Preparatory School students Arnav Muppuri, Michael Meggo, and Amelia Chattoo would testify. Amelia, the school’s top-performing girl, got a 98 per cent average; while Arnav and Michael had to share the spot for the school’s top boy, both having a 98.6 per cent average.

“The overall performance of our students in the grade six class is quite satisfactory. They worked very well and studied hard,” Mount Alvernia principal Angela McPherson said in praising her students’ performance.

“I am happy that as the principal, I am able to walk in and give a pep talk to the students, teach them how to study, and study with them as well.”